So you may recall a bet that took place around the 2010 Olympic timeframe which had me, and Team Canada, matched up against fellow BizTalk MVP Mikael Håkansson and Team Sweden.  As we all know, Canada won the Olympic Gold Medal and I won the bet.

The Christmas break is well anticipated holiday for many obvious reasons in Canada.  While most people in Canada are stuck indoors for the coldest part of the year, many are glued to their television sets watching the World Junior Hockey tournament.  This tournament represents the best under 20 year old Hockey players on the the planet.  Most of these players will end up playing professional Hockey somewhere and many will make the NHL.

On December 31st, 2010, Canada squared off against Team Sweden in a round robin game.  Once again Mikael taunted me with a blog post so I couldn’t resist opening up that wound of his from earlier in the year.

This time around it is my time to eat crow.  Sweden beat Canada 6-5 in a shoot-out and in return here is my tribute to Team Sweden and Mikael.

There are still some games left and I am confident that Team Canada can pull it off. There is a good chance that Canada could play Sweden so perhaps there will be a rematch bet? 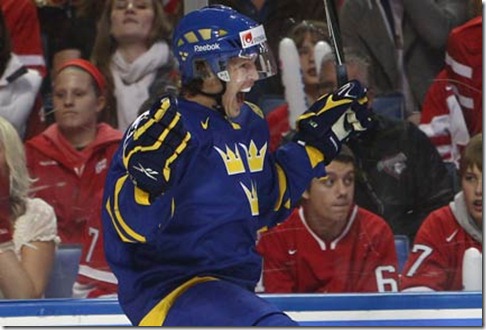 I recently received word that I have been re-awarded for another year.  Contributing to the BizTalk community continues to be something I enjoy and am passionate about so it is always nice to be recognized by Microsoft for my efforts.

Looking back at 2010, it sure was a busy year.  I spent a lot of time in the areas of SharePoint and SAP integration.  I attended TechEd in New Orleans where I also helped out at the BizTalk booth.  I gave a SharePoint and App Fabric Service Bus presentation to the Calgary .Net User group and had the opportunity to go to Sweden and speak about Monitoring your BizTalk environment with SCOM.  Travelling to Stockholm and spending time with Mikael Håkansson and Johan Hedberg was one of my highlights even if Mikael signed both Johan and I up for an Olympic distance triathlon.

While no where near Seroter numbers, this blog received just over 40 000 hits over the past year, so I thank you for taking the time to stop by and read my content.  All the best for the upcoming year.