As you are probably aware by now, BizTalk 2010 has RTM’d.  You can catch the announcement here.  I am not going to recap all of the new features as you can read about them here.  However, here are a few points worth noting about the new release.

Posted by Kent Weare at 8:39 AM No comments:

Note:  The following steps do not represent a supportable configuration by Microsoft and extreme caution should be used when following these steps.  To my knowledge, these steps are complete, but it is possible that I missed something.  These steps have been tested in a Send Port Subscription scenario.   Use these instructions at your own risk. 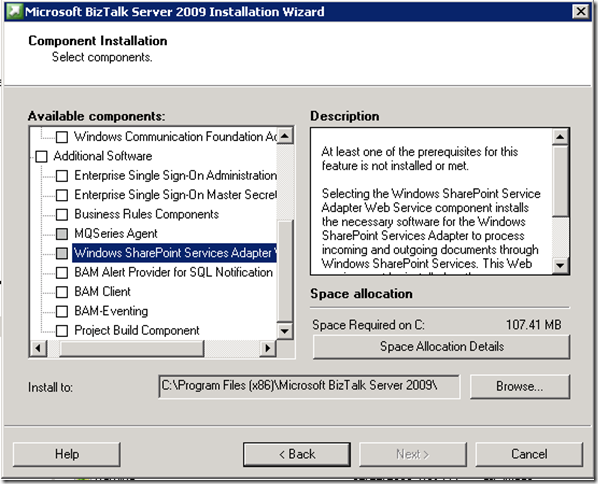 Mick Badran has a post that helped me out tremendously. However, I found that I had to take a few additional steps so I will recap exactly what we did in order for us to get this to function in our environment.

We had an existing MOSS 2007 server that had the BizTalk Adapter Web Service installed and functioning correctly.  Since you cannot use the BizTalk installation wizard to install this Web Service, we decided to reverse engineer what was deployed on MOSS 2007 and manually deploy on SharePoint 2010.

Description:
The adapter failed to transmit message going to send port "SendPort1" with URL "wss://SERVER:80/DropOffLibrary". It will be retransmitted after the retry interval specified for this Send Port. Details:"System.Web.Services.Protocols.SoapException: Server was unable to process request. ---> System.IO.FileNotFoundException: Could not load file or assembly 'Microsoft.BizTalk.KwTpm.OfficeImporters2, Version=3.0.1.0, Culture=neutral, PublicKeyToken=31bf3856ad364e35' or one of its dependencies. The system cannot find the file specified.
File name: 'Microsoft.BizTalk.KwTpm.OfficeImporters2, Version=3.0.1.0, Culture=neutral, PublicKeyToken=31bf3856ad364e35'
at Microsoft.BizTalk.KwTpm.WssAdapter.BTSharePointAdapterWS..ctor()

This error was triggered by the Windows SharePoint Services receive location or send port with URI wss://SERVER:80/DropOffLibrary.

Once again it was back to the MOSS 2007 server and more specifically, a trip to the GAC where we discovered the following BizTalk Dlls.  This list included the Microsoft.BizTalk.KwTpm.OfficeImporters2.dll that was mentioned in the event viewer.  We then pulled these dlls off of the installation CD and gac’d them on the SharePoint 2010 server using gacutil.

After Gac’ing these assemblies we had success pushing messages from BizTalk 2009 to SharePoint 2010.

Note: There is another option which I have not tried that Kirk Hofer discusses here.  It involves installing WSS v3.0 SP2, but not configuring it, so that the BizTalk install Wizard thinks it is installed.  Our SharePoint team was not crazy about having these other dlls on their fresh SharePoint 2010 server so we were unable to proceed with this approach.