After going through the process of migrating a BizTalk 2006 R1 solution to BizTalk Server 2009 (beta) I am happy to report that the process is a painless endeavor. The process itself reminds me a lot of the BizTalk 2004 - 2006 migration process.

Scenario
My dev box has a clean install of BizTalk Server 2009 and did not previously have Visual Studio.Net 2005 on it. Therefore, I needed to go through the Code Conversion process. I used a BizTalk 2006 project from a previous blog post. The project was not all that complex but it did include the typical artifacts that you would find in a BizTalk solution. This includes:

Process
As you can see the DeliveryNotification sln file is a Visual Studio '8' (or VS.net 2005) file. 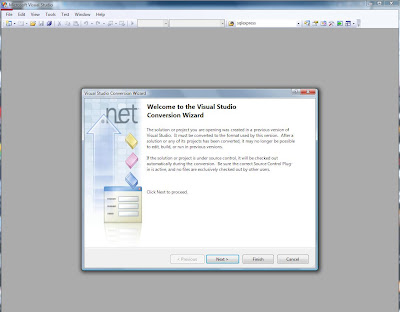 After clicking on "Next" you will be prompted with a dialog box that lists all of the related projects that will get migrated. 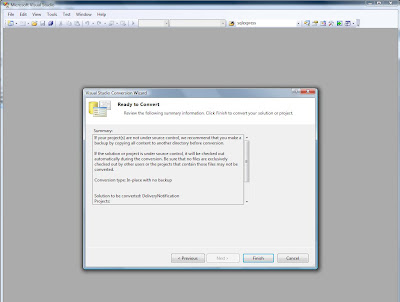 Success! Enable the check box to see the conversion report. 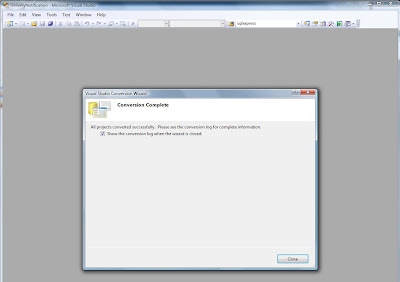 The results of the conversion process are documented below and the project listings are on the right hand side. Note that BizTalk projects currently have a "C#" icon. I do expect this to change as this is Beta. The underlying reason for this is that BizTalk projects are now considered to be 'flavours' of C# projects as discussed in this post. So what was converted?
Here is a screenshot of what my BizTalk artifacts look like after the conversion process. By observing the Date modified timestamps, you get a sense of what was changed.

After taking a closer look, you will find that the actual BizTalk artifacts(schemas, orchestrations, maps etc) are not actually getting modified. Rather, it is the Visual Studio artifacts(solution file, project file, user settings) that are being modified. 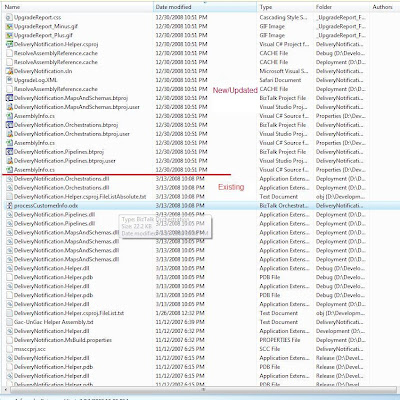 Post Conversion
So the conversion process worked - now what? When I tried to build and deploy the solution I had no issues:

When I launched the BizTalk Admin Console, I was pleased to see that my Application Container and related artifacts were created during my deployment from VS.net 2008. Since this was my initial deploy on a clean dev box, I didn't have any bindings for the orchestration, receive locations or send ports.

I decided to import an existing binding file from my BizTalk Server 2006 solution. 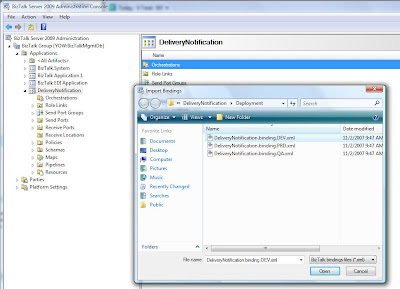 The binding file import was successful!

I did discover an issue when I tried to start up the application from the tree view on the left hand side:

I checked the Microsoft Connect site and saw that Ben Cline had already reported this as a bug. I added some of my own comments so Microsoft is aware of it and I would expect that it will get resolved for the next release.

Conclusion
While my project was not all that complex, I was happy with the migration experience and feel pretty confident in moving my projects from BizTalk 2006 to BizTalk 2009. 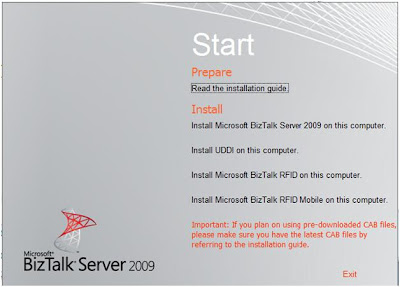 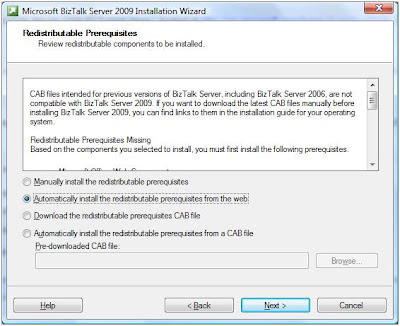 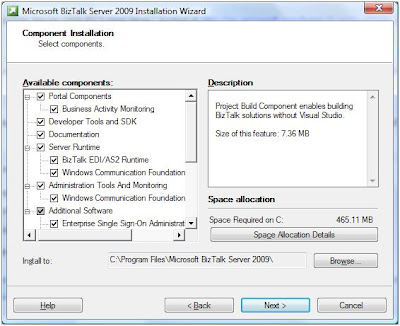 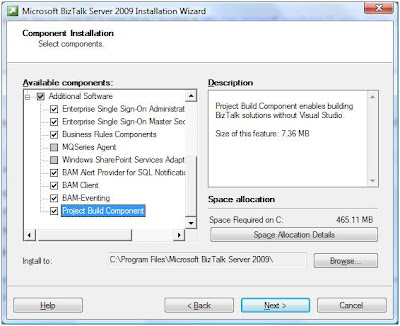 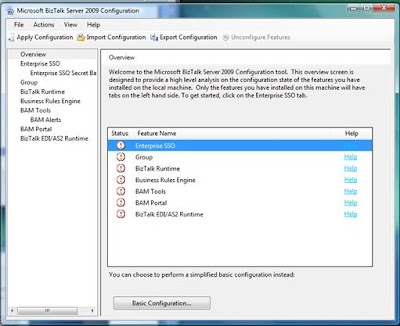 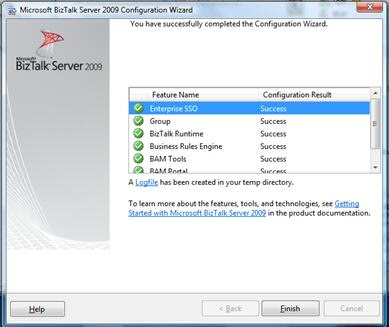 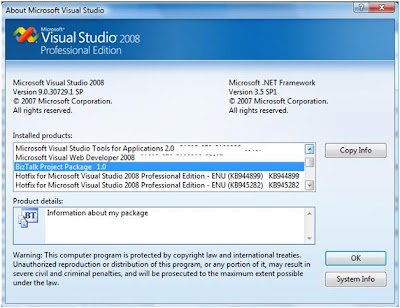 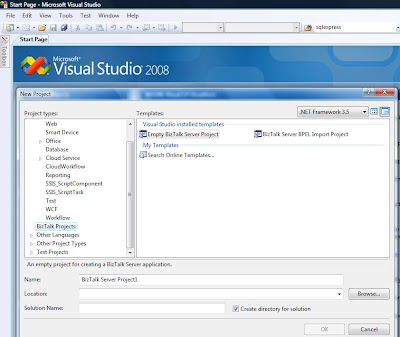 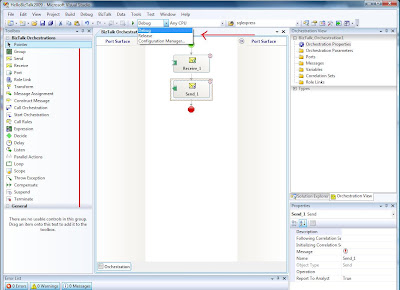 I have recently been evaluating the Azure Services Kit and ran across an error that I figured I would post in case anyone is looking for a solution.

The error occurs in Exercise #2 when trying to initialize the Server project to listen for requests through the .Net Services Service Bus. I would imagine that this error applies more so to IIS and WCF than the actual Service Bus.

Solution
The solution itself can be found in the link that is provided ( http://go.microsoft.com/fwlink/?LinkId=70353) ...I know what a bonus; an error message that actually points you in the right direction to a solution.

The description of the error is not all that useful, but does cover some scenarios:
Using Windows Communication Foundation (WCF) over HTTP either requires the use of a host, such as Internet Information Services (IIS), or manual configuration of the HTTP settings through the HTTP Server API. This document describes manually configuring WCF when using HTTP and HTTPS.

In order to actually solve the problem, I ran this command on my Vista machine:

Now that I have some spare time, I plan on spending some more time with Azure and more specifically .Net Services. Hopefully, I will have some interesting posts regarding these technologies. 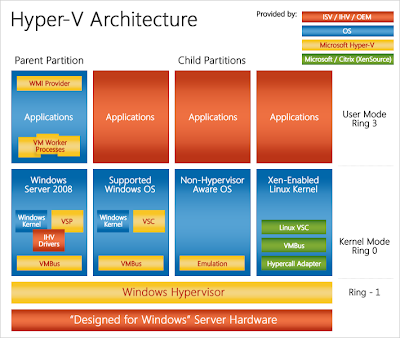 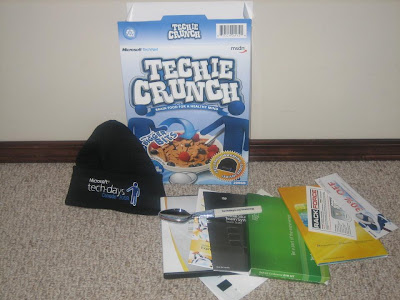 TechDays_CA
Posted by Kent Weare at 5:31 PM No comments:

The bits are now available for download from Microsoft Connect.

What can you expect?

Extend To The Edge

This beta is community supported. The TechNet forums will be the primary place for support - http://forums.microsoft.com/TechNet/ShowForum.aspx?ForumID=1470&SiteID=17.

Posted by Kent Weare at 8:46 AM No comments: