Below is an image of my original map. All elements are required except Operation. The Operation element is of type long and a third party system will be sending this so we don't have total control over the data types. The equivalent element on the destination message is VORNR which happens to be part of an SAP IDoc. The element on the IDoc is also optional, but if it is provided, it needs to have padded values to make it a 4 digit string. So if 220 is provided by the source system then 0220 needs to be passed to the IDoc. 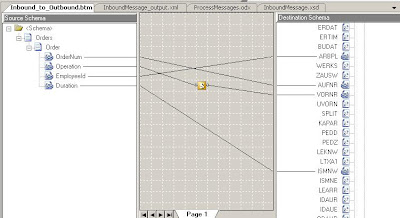 Below is an image of a message sent in without the Operation element.

The issue is that if the element doesn't exists, then BizTalk will generate the following exception(truncated for readability):
Exception type: OverflowExceptionSource: mscorlibTarget Site: Int64 System.IConvertible.ToInt64(System.IFormatProvider)The following is a stack trace that identifies the location where the exception occurred


So to get around this, I have added some checks in the Map to ensure that the scripting functoid is only called when the Operation element exists. 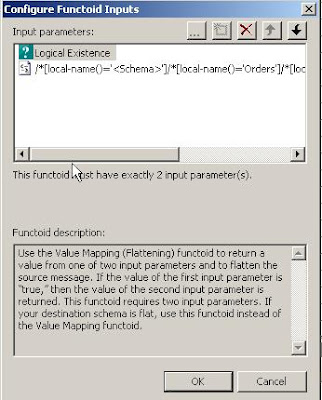 Is there any way to check if the element does not exists so that i can map other element to the destination. Since IsExistence functoid does not return false how can i check for the existance of the element

What about using the "Not" functoid that will return the opposite value of the IsExistence functoid inconjunction with the Value Mapping functoid?