During the clustering and configuration of the Enterprise Single Sign on service we ran into the following issue when trying to restore the master secret.

C:\Program Files\Common Files\Enterprise Single Sign-On>ssoconfig -restoresecret
C:\mastersecret\SSOD04F.bak
Password reminder : *Reminder*
Password : ********
ERROR: 0xC0002A0F : Could not contact the SSO server '*PhysicalNode*'. Check that SSO
is configured and that the SSO service is running on that server.
(RPC: 0x800706D9: There are no more endpoints available from the endpoint mappe
r.)

I thought it was odd that the *PhysicalNode*

Upon checking the status of SSO I was provided the following information:

Using SSO server on this computer

When trying to configure the BAMArchive database on a fresh BizTalk 2009 64 bit install, I encountered the following error:
Microsoft SQL Server 2008 Data Transformation Services (DTS) for BAM Archiving is not installed on the local machine. Please install Microsoft SQL Server 2008 Integration Services.
...
Could not load file or assembly 'Microsoft.SqlServer.ManagedDTS, Version=10.0.0.0, 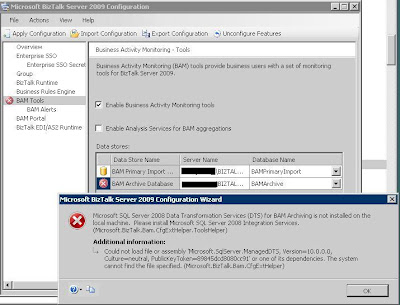 This error makes it sound like you need to install SQL Server Integration Services (SSIS) which is a little misleading.

The documentation on MSDN indicates the following:

In order for me to complete my installation, I installed the following components from the SQL Server 2008 media(I don't see the Legacy Components option). 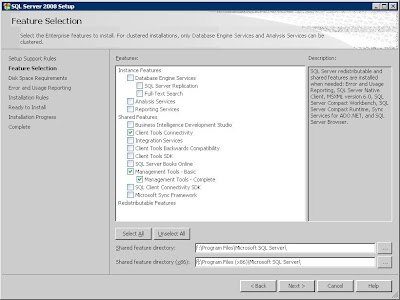 I have been running BizTalk 2009 for quite some time now including the Beta version. Up until now, all of the work that I have been doing was on a 32bit platform. Now that we are moving to a 64bit platform, I am starting to run into some more challenges related to 64bit.

I installed the 64bit version of the WCF SDK SP2. I then went and installed the 64bit version of the BizTalk Adapter Pack 2.0. I opened a project that I had previously built on a 32 bit machine and successfully deployed the application to my 64bit laptop. When I attempted to import the binding file that had been previously used on the 32 bit solution, I got the following error: 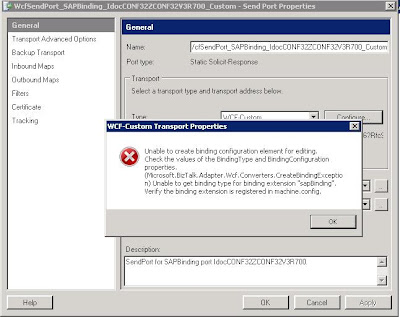 At this point I tried to create a new send port that uses the Custom WCF Adapter. I clicked on the "Binding" tab and then on the pull down to see just what bindings had been registered. Here is what I found: 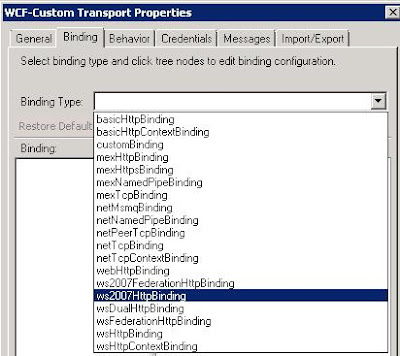 As you can see the sapBinding is no where to be found. I was curious to see what Visual Studio was seeing when I called upon the Consume Adapter Service. The error message that I received was "No valid adapters are installed on this machine"

After some digging, I was able to find the following link on TechNet which discusses the SQL Adapter, however the behaviour applies to the SAP Adapter as well.

Resolution
Install both the 32-bit and 64-bit versions of the BizTalk Adapter Pack on a 64-bit WCF LOB Adapter SDK installation.

So this explanation deals with Visual Studio, but what about the BizTalk Admin Console? Well, it runs as a 32 bit process as well which explains why the Adapter is not visible inside the console. After installing the 32bit BizTalk Adapter Pack 2.0, the sapBinding will now appear. 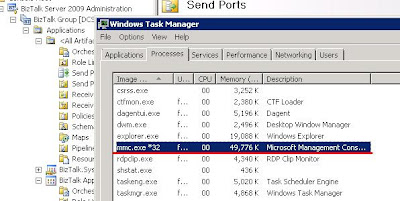 Suddenly, I am not as excited about the 64bit platform as I was previously.

I am currently involved in a BizTalk 2009 upgrade. We are lucky enough to get some new hardware that screams and we are now running 64bit. We are taking this opportunity to try to streamline our server deployments. This includes Rapid Deployment images at the OS level and scripting as many installs as possible based on server naming convention.

When I was asked whether BizTalk could be silently installed I assumed it could be but had to do some investigation. This is when I stumbled across this page: http://support.microsoft.com/kb/971655

Initially we thought about silently installing all components and then just configuring the features that we needed (No EDI). This was a good idea until we got an error message indicating that the install could not continue because we didn't have VS 2008 SP1 installed. The purpose of these scripted deployments were to target our Test/Prod BizTalk and SQL farms. Since these servers would be used in Test and Prod we did not want VS 2008 installed.

The next option was using the /S switch which allows you to provide a configuration file that would include all of the features you want to install. The problem is that the document is not real explicit about where you would find this configuration file or the format that the file needs to be in.

After some pointers from Matt Milner, Alan Smith and Bill Chesnut I was able to get this working.

Here are the steps that you need to follow in the event that you have a farm where you want installations to be consistent across the farm:

Note: I initially tried the install using the the /QUIET switch but was then prompted with an error indicating that I could not provide a configuration file and use the "Quiet" switch. This wasn't the end of the world for me as an interface is displayed but it does not require any action - no buttons or prompts to click through.

So if you have a farm you will probably want to take advantage of this features since it will save you a little time and will ensure that you have a consistent install across the farm. It doesn't help you much with your initial installs though.

This month I am featured in Richard Seroter's 4 questions series. I am a big fan of his blog and this feature so I had no hestitation when it came to accepting his invitation. Here is the link to the interview: http://seroter.wordpress.com/2009/08/03/interview-series-four-questions-with-kent-weare/
Posted by Kent Weare at 8:59 AM No comments: