On November 21st and 22nd I had the opportunity to spend a couple days at the 2nd annual BizTalk Summit held by Microsoft in Seattle.  At this summit there were approximately 300 Product Group members, MVPs, Partners and Customers.  It was great to see a lot of familiar faces from the BizTalk community and talk shop with people who live and breathe integration.

The Summit started off with a bang when Scott Gu announced that Windows Azure BizTalk Services has reached General Availability (GA)!!!   What this means is that you can receive production level support from Microsoft with 99.9% uptime SLA.

During the preview period, Microsoft was offering a 50% discount on Windows Azure BizTalk Services (WABS).  This preview pricing ends at the end of the year.  So if you have any Proof of Concept (POC) apps running in the cloud that you aren’t actively using, please be aware of any potential billing implications.

The next exciting piece of news coming from Microsoft is the release cadence update for the BizTalk Server product line.  As you have likely realized, there is usually a BizTalk release shortly after the General Availability of Platform updates.  So when a new version of Windows Server, SQL Server or Visual Studio is launched, a BizTalk Server release usually closely follows.  Something that is changing within the software industry is the accelerated release cadences by Microsoft and their competitors.  A recent example of this accelerated release cadence is Windows 8.1, Windows Server 2012 R2 and Visual Studio 2013.  These releases occurred much sooner than they have in the passed.  As a result of these new accelerated timelines the BizTalk Product Group has stepped-up, committing to a BizTalk release every year!  These releases will alternate between R2 releases and major releases.  For 2014, we can expect a BizTalk 2013 R2 and in 2015 we can expect a full release.

So what can we expect in the upcoming release? 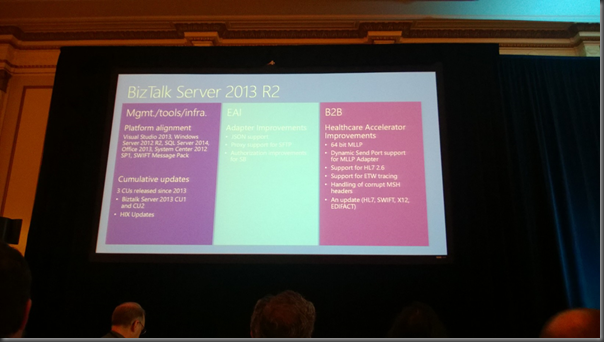 There were a lot of good sessions but one that I found extremely interesting was the session put on by Manufacturing, Supply Chain, and Information Services (MSCIS).  This group builds solutions for the Manufacturing and Supply Chain business units within Microsoft. You may have heard of a “little” franchise in Microsoft called XBOX.  The XBOX franchise heavily relies upon Manufacturing and Supply chain processes and therefore MSCIS needs to provide solutions that address the business needs of these units.  As you are probably aware, Microsoft has recently launched XBOX One which is sold out pretty much everywhere.  As you can imagine building solutions to address the demands of a product such as XBOX would be pretty challenging.  Probably the biggest hurdle would be building a solution that supports the scale needed to satisfy the messaging requirements that many large Retailers, Manufacturers and online customers introduce.

In a traditional IT setting you throw more servers at the problem.  The issue with this is that it is horribly inefficient.  You essentially are building for the worst case (or most profitable) but when things slow down you have spent a lot of money and you have poor utilization of your resources.  This leads to a high total cost of ownership (TCO).

Another challenge in this solution is that an ERP is involved in the overall solution.  In this case it is SAP(but this would apply to any ERP) and you cannot expect an ERP to provide the performance to support ‘cloud scale’.  At least not in a cost competitive way. If you have built a system in an Asynchronous manner you can now throttle your messaging and therefore not overwhelm your ERP system.

MSCIS has addressed both of these major concerns by building out a Hybrid solution. By leveraging Windows Azure BizTalk Services and Windows Azure Service Bus Queues/Topics in the cloud they can address the elasticity requirements that a high demand product like XBOX One creates. As demand increases, additional BizTalk Services Units can be deployed so that Manufacturers, Retailers and Customers are receiving proper messaging acknowledgements.  Then On-Premise you can keep your traditional capacity for tools and applications like BizTalk Server 2013 and SAP without introducing significant infrastructure that will not be fully utilized all the time.

Our good friend, Mandi Ohlinger ,who is a technical writer with the BizTalk team, worked with the MSCIS  to document the solution.  You can read more about the solution on the BizTalk Dev Center.  I have included a pic of the high-level architecture below. 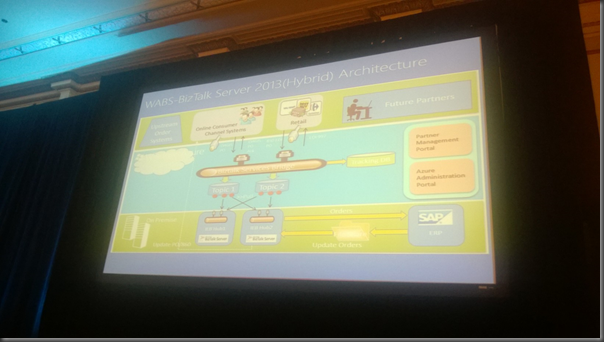 While Microsoft is a large software company(ok a Devices and Services company) what we often lose sight of is that Microsoft is a very large company (>100 000) employees and they have enterprise problems just like any other company does.  It was great to see how Microsoft uses their own software to address real world needs.  Sharing these types of experiences is something that I would really like to see more of.

If you have evaluated Windows Azure BizTalk Services you have likely realized that there is not currently symmetry between the BizTalk Service and BizTalk Server.  BizTalk Server has had around 14 years (or more) of investment where as BizTalk Services, in comparison, is relatively new.  Within Services we are still without core EAI capabilities like Business Process Management (BPM)/Orchestration/Workflow, Business Activity Monitoring (BAM), Business Rules Engine (BRE), comprehensive set of adapters and complete management solution.

With BizTalk Server we have a mature, stable, robust Integration platform.  The current problem with this is that it was built much before people started thinking about cloud scale.  Characteristics such as MSDTC and even the MessageBox have contributed to BizTalk being what it is today (a good platform), but they do not necessarily lend themselves to new cloud based platforms.  If you look under the hood in BizTalk Services you will find neither of these technologies in place.  I don’t necessarily see this as a bad thing.

A goal of most, if not all, products that Microsoft is putting is the cloud is symmetry between On-Premise and Cloud based offerings.  This puts the BizTalk team in a tough position.  Do they try to take a traditional architecture like BizTalk Server and push it into the cloud, or built an Architecture on technologies that better lend themselves to the cloud and then push them back on premise? The approach, going forward,  is innovating in the cloud and then bringing those investments back on-premise in the future.

Every business has a budget and priorities have to be set.  I think Microsoft is doing the right thing by investing in the future instead of making a lot of investments in the On-Premise offering that we know will be replaced by the next evolution of BizTalk.  There were many discussions between the MVPs during this week in Seattle on this subject with mixed support across both approaches. With the explosion of Cloud and SaaS applications we need an integration platform that promotes greater agility, reduces complexity and addresses scale in a very efficient manner instead of fixing some of the deficiencies that exist in the current Server platform. I do think the strategy is sound, however it will not be trivial to execute and will likely take a few years as well.

Based upon some of the sessions at the BizTalk Summit, it looks like Microsoft will be looking to create a larger ISV eco-system around BizTalk Services.  More specifically in the Adapter space.  The reality is that the current adapter footprint in BizTalk Services is lacking compared to some other competing offerings.  One way to address this gap is to leverage trusted 3rd parties to build and make their adapters available through some sort of marketplace. I think this is a great idea provided there is some sort of rigor that is applied to the process of submitting adapters.  I would not be entirely comfortable running mission critical processes that relied upon an adapter that was built by a person who built it as a hobby.  However, I would not have an issue purchasing an adapter in this fashion from established BizTalk ISV partners like BizTalk360 or /nSoftware.

All in all it was a good summit.  It was encouraging to see the BizTalk team take BizTalk Services across the goal line and make it GA.  It was also great to see that they have identified the need for an accelerated release cadence and shared some news about the upcoming R2 release.  Lastly it was great to connect with so many familiar faces within the BizTalk community.  The BizTalk community is not a huge community but it is definitely international so it was great to chat with people who you are used to interacting with over Twitter, Blogs or LinkedIn.

In the event you still have doubts about the future of BizTalk, rest assured the platform is alive and well!