The Keynote started off like a Keynote from another technology company.  A DJ was spinning tunes and also showed off his new ‘turntable’ that runs on Windows technology and is all the rage these days (so he says). 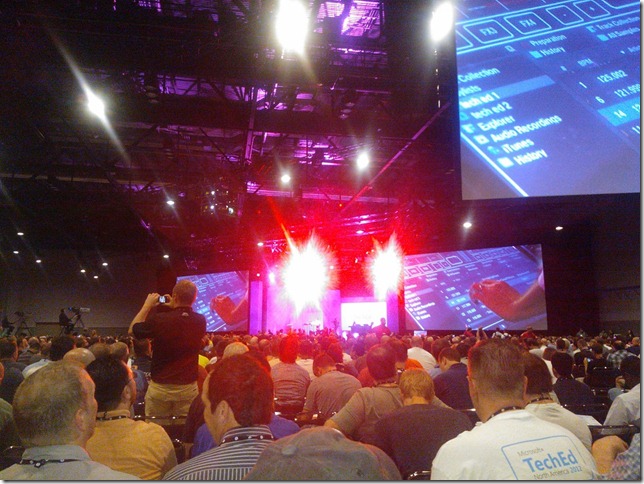 Post DJ dialog, Satya Nadella stepped up to the mic and provided some insight into the state of computing inside and outside of Microsoft.  He provided the following:

Next up was Jason Zander and he was here to speak about some of the advancements in the Windows Server and System Center product space.  Jason added that datacenters, no matter on-premise or cloud, are required to be more responsive to ever changing business needs.  Much like everything, it seems, these days people want services cheaper, faster and delivered yesterday.  The advancements in Windows Server and System Center have been created to address these needs(well except the yesterday bit).

The Modern Datacenter needs to be:

Mark Russinovich was up next.  He wanted to discuss some of the advances that the Azure team has made in the area of supporting durable Virtual Machines in Azure.  One of the more humorous moments was when he referred to a slide that had a Linux logo on it: “no we didn’t get hacked, we do support Linux”.

The CIO from Aflac, an insurance company, who has deployed a SharePoint solution to Azure was brought on stage to share his experiences with Azure.  They have built a solution by provisioning VMs into Azure.  Aflac chose Azure based upon the agility and flexibility that it provides.

The Keynote then shifted towards the Developer experience including new Azure and Visual Studio 2012 functionality.

Inside the modern Application

HTML is now supported for LightSwitch

Having the DJ out there at the beginning was a nice touch.  I am sure they wanted to pump up the crowd and generate some excitement.  I think they hit the mark here but slowly the energy started to drain.  There were several demos that didn’t work or required a second take for them to run.  This is a bit of a let down as an attendee.  Sure “stuff happens” but it seems like there could have been more rehearsing happening before hand.

I also felt Microsoft missed an opportunity to talk about Windows 8 and consumer devices.  Arguably this is not the right time or place to do this but everyone in the building uses a computer on a day to day basis as part of their job.  I would have loved to seen some demos of some slick new tablets or ultra books running the latest offerings.  Ironically I heard more people talking about the newly released MacBook Pro today than Windows 8 devices.  I see this as suitable evidence that they missed the mark considering the “pro” Microsoft audience at this conference.

If you have never seen Scott speak…you are missing out.  He has this uncanny ability to take an awkward situation and make people laugh.  He did this at Summit with his “Bob” Azure site and once again today with his “Dude” Azure site.  He is very engaging and enjoys ‘pop-star’ status amongst the Microsoft loyalists.

In his presentation, he elaborated on some of the recent news that he shared at the Meet Azure event.  More specifically he focused on the new durable VM support, Azure Websites and ServiceBus.  Surprisingly he even included “BizTalk” a couple times and  he did not include the words “death, dead, soon to be dead or shot dead” in the same sentence.

Overall it was a good session.  Like I mentioned before, Scott is a great speaker and I enjoyed listening to him.  Some of the content he provided I have seen at Summit, but I certainly can’t hold that against him.  I think this was a great introduction to Azure for people that have not seen it before or for those who took a look a few years back and are now interested in learning more about it.

You have to wonder about have an early presentation at TechEd about SharePoint 2010.

agreed...too much "legacy" (and I use that word loosely) content being shown.