BizTalk 2010 Beta – Where are the AppFabric Service Bus bindings?

After installing the Windows Azure platform AppFabric SDK V1.0 - April Update I was expecting all of the AppFabric Service Bus relay bindings to be available inside of the BizTalk Admin Console but they were not.  I could run the AppFabric Echo .Net Sample without any issues.  After re-installing both the AppFabric SDK and BizTalk 2010 Beta I was still unable to find these bindings in the Admin console.  I checked the machine.config files (both 32 bit and 64bit) and both files were updated.  The problem with this is that I checked the .Net 2.0 config files.

The name of this file should be called RelayConfigurationInstaller.exe.config.

After this command was run successfully, I could now see the “Cloud Bindings” including the NetTcpRelayBinding 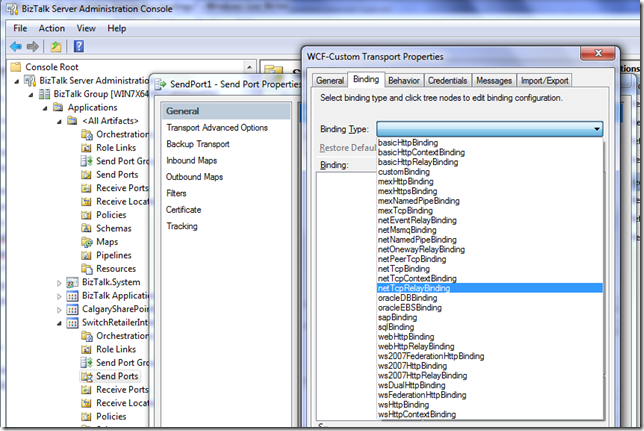 Kent - I had wanted to discuss this in our Tech Ed presentation, but Chris swears it worked for him (the install changed the .NET 4.0 config file).

I hadn't looked at the Service Bus stuff since BTS 2009 so I was really surprised when I could not get this working. If I wouldn't have seen your demo at TechEd, I probably would have logged a bug on connect. Luckily I was able to resolve it without too much effort. I was very close to emailing you guys though.

I had one additional issue that might be worth mentioning in the same context. On a x64 dev machine I had installed only the x86 Adapter Pack (sqlBinding).

When running the tool as above I got an exception:

The resolution is to make sure the x64 Adapter Pack is installed as well.

Good point Johan. I have seen this with the SAP adapter as well.